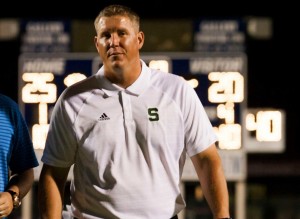 The Spring Lions enjoyed an historic run last season, and they continue finding ways to push the bar higher.

They leaped over the bar with a 36-30 win over Klein Collins last week.

The upset win handed Collins its first loss of the season, and put Spring in position to claim its first district championship.

“The kids played absolutely outstanding. We had a good plan offensively and defensively and on special teams and the kids executed well, and we won.”

The Tigers scored twice in the fourth quarter to pull within six, but Spring held them in check most of the way. Standout running back Justin Pratt ran for a modest (for him) 134 yards and one touchdown.

“Klein Collins is such a great football team, and they do such a great job, but we had a good plan about getting to the edges,” Parker said. “And we knew we were going to have to throw the ball, as good as their defensive line and front six are … and (quarterback) Eric (Spencer) did a great job.

No Events This Week

Events are added by athletic staff.
View All Events